It Is a Small World...after all

There’s a ride at Disneyland (that would be the California one…) designed for smaller children that plays an unforgettable song. I’m guessing you know which one I’m talking about. I think it was the only ride my oldest actually enjoyed when I took him there a few months before he turned 4. Mickey Mouse really is a 6-ft giant rat when you’re still a little person…
Since moving to Georgetown almost a year ago, I have had all kinds of “It’s a Small World” experiences. I’ve run into former neighbors from Victoria. One of our church members is the daughter of my second-grade teacher from Victoria. And then there are all these other connections.
One member has a son who serves as a neighboring County Commissioner and a family friend knows him…another member ran for representative back when Victoria and Williamson County were in the same district and campaigned in Victoria (they know some of the people I know of…let’s just say we didn’t run in the same circles).
Today, though, I went to visit a member in an Austin hospital. Another one of those “It’s a Small World” things because a former uncle (translation: the ex’s uncle) was in the same hospital. This uncle and his wife (it gets confusing so just play along) were absolutely the kindest people. And, oh my, could he barbecue! He ran a catering business for a long time, even catered my wedding.
I stopped to visit, re-introduced myself (he had had major surgery the day before) and we chatted for a few minutes. He told me he missed me and to tell the boys hello for him. I have no idea where those goofy tears came from…but, wow, that meant so much to me.
And so I am reminded that we do indeed live in a very small world. God allows us to connect in so many interesting ways. While I may have preferred to avoid some of those “growing experiences,” I am so grateful for the people I have encountered, the ones who have touched my life in such meaningful ways.
Posted by RevSis at 10:49 PM 1 comment:

Over the past week, I have done some extraordinary chapter closing. I sold my house in Fort Worth last Friday. I nodded my head as the one-year anniversary of the big D passed yesterday. And, today, I bought a car.
I’m trying really hard not to be too excited about the car. But looking back…yeah, I am excited and it’s just going to have to be ok. A little over 2 years ago, I got to experience my first repossession (not an adventure I recommend). It was just the tip of the iceberg as far as the extent of debt stupidity I found myself swimming in as he-who-shall-not-be-named became the incarcerated one. Again, another adventure I advise against…
God is good and so is family. Dad had been on the look-out for a minivan (don’t ask) and found one about the time Wells Fargo needed to relieve me of my current ride. I guess I’ll never know if he really wanted the minivan he got or if he settled for it to be able to pass along their older car. Either would have made him happy so I will be happy about it, too.
It’s been a great car and I can’t tell you how grateful I have been to have it. It celebrated its 10-year birthday and kept going beyond the 125,000-mile mark. But it was showing signs of its advanced years. The engine light was just one of the quirky little personality traits. (Seriously, I had it checked, several times). And, it got to be a bit funny when I filled the tank and spent the first ¼ tank playing the you’ve got gas/the tank is empty game, complete with the dinging bell. In other words, this car had character.
However, I have to admit that each time I got on the highway, I prayed. And prayed that it would take me where I was headed without any problems.
Selling the house was another God-thing and I remain incredibly grateful. I decided it was time to replace the adventure car. Enter the new (to me) Volkswagen Jetta. It’s a 2009 with 40,000 miles…with a small down payment, I am finally rebuilding my credit. (Although, I’m not sure if Dave Ramsey would pat me on the back…)
So, yeah, I had fun driving my new ride home. And, yeah, I had a moment of sadness, thinking about how proud Dad was of that old car, how thrilled he was to be able to pass it on to me when I really, really needed it. Then I realized how much fun he would have had playing with all the gadgets on my “new” VW….
I’m excited about it…and Dad would have loved to drive it, too. 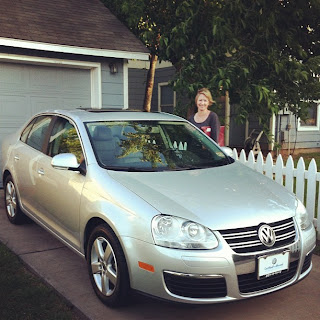